By Christine Schott Ledes February 24, 2020 in Articles No Comments 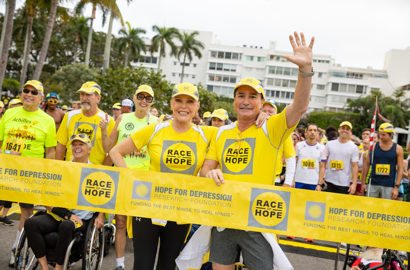 More than 600 men, women and children raised over $400,000 on Saturday, February 15 at the second annual Palm Beach Race of Hope to Defeat Depression. 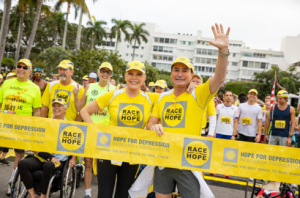 The 5K run/walk began at the Royal Poinciana Plaza shopping gallery, followed a trail by the North Lake and then returned through scenic streets back to the Plaza. The USA Track and Field-sanctioned race was led by Race Co-Grand Marshals, HDRF Founder Audrey Gruss, and Board member Scott Snyder.

Speaking from the starting gate, HDRF Founder and Chair Audrey Gruss said, “Depression is the No. 1 reason in the world for disability and current medications available only help 50 percent of people. We are so moved by the support from Palm Beach community.” 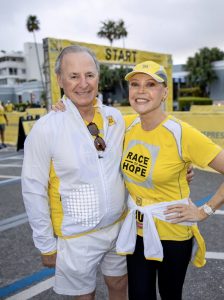 Gruss continued: “One of the most important things about the race is raising awareness, diminishing the stigma and getting people to talk about it more openly, ultimately saving lives. While research for this subject takes a while, here people are doing something active for the cause.”

Hope was in abundant supply as everybody wore caps and gear in HDRF’s signature sunshine yellow. First out of the gate was the wheelchair division cheered on by the crowd.   Then, the competitive runners burst across the starting line at the sound of a horn, followed by first-time runners, walkers, corporate teams, families, children, and plenty of canine friends.   After the race, participants were ready to hit the festival tents offering bagels and coffee, gelato, fruit, and sports massages.

In the closing ceremony, Audrey Gruss and Scott Snyder presented medals for best times in various age categories. Dixon McDonald won the best time in the Adult Male category, and Marie Sippus won the best time in the Adult Female category.  Paul Totman, 66, was the winner for the Wheelchair Division.  Ben Allina, age 15, won for best youth male (13-15), and Meredith Woods, age 14, won for best youth female (13-15). Gruss and Scott Snyder then presented Kimberly Bitterman and Kristina McCooey with an award to Sisters Sledge as the Top Fundraising Team, raising over $25,000; and presented Linda Olsson an award for Top Individual Fundraiser for raising $1,767. The award for Largest Fundraising Team went to Livingston Builders, with 26 runners, and was accepted by Lila Remez, daughter of Livingston Builders owners Teresa and James Remez.

This year’s Race of Hope once again was the grand finale of the Week of Hope, a town-wide campaign in Palm Beach to raise mental health awareness.  The Week of Hope started with the lighting of the Royal Park Bridge in sunshine yellow on February 4.   On Wednesday, February 5, more than 50 stores at The Royal Poinciana Plaza such as LoveShackFancy and Paul Labrecque Salon & Spa “turned yellow” by placing two-foot-wide yellow balloons (environmentally safe and re-usable) by their front door in a statement of hope and commitment to raising mental health awareness. Additionally, on Wednesday, February 12, Worth Avenue’s Via Bice hosted a shop and sip where guests enjoyed music and refreshments while all stores in the Via donated a percentage of the day’s sales back to Hope for Depression Research Foundation.

Audrey Gruss founded HDRF in April 2006 in memory of her mother Hope, who struggled with clinical depression. Today, HDRF is the leading nonprofit organization focused solely on depression research and public education. The World Health Organization has declared depression as the leading cause of disability worldwide, but despite its prevalence, depression is still misunderstood, underfunded and under-researched. The mission of the HDRF is to fund innovative neuroscience research into the origins, medical diagnosis, new treatments, and prevention of depression and its related mood disorders – bipolar disorder, postpartum depression, post-traumatic stress disorder, anxiety disorder, and suicide.

To date, HDRF has provided more than $30-million through over 125 grants for breakthrough depression research that promises to transform the way depression is viewed, diagnosed, treated and prevented.

What is HDRF, and a quick overview of their work/achievements in the past decade:

The Crisis in Research and Treatment:

RETAIL REVIVAL IN THE AGE OF COVID-19 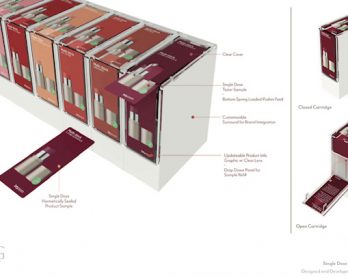 RETAIL REVIVAL IN THE AGE OF COVID-19 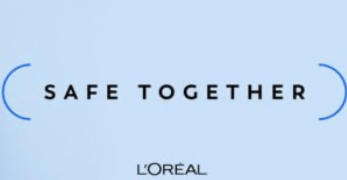 #Safetogether, e-learning module developed by L’Oréal to secure the return to the workplace of its employees 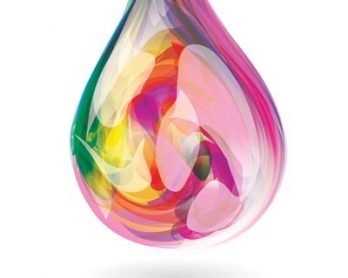 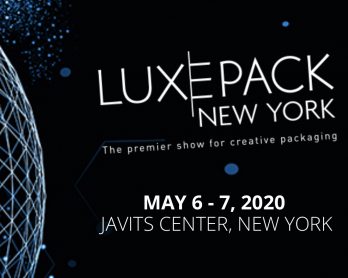