By Christine Schott Ledes May 5, 2019 in Featured Makeup No Comments 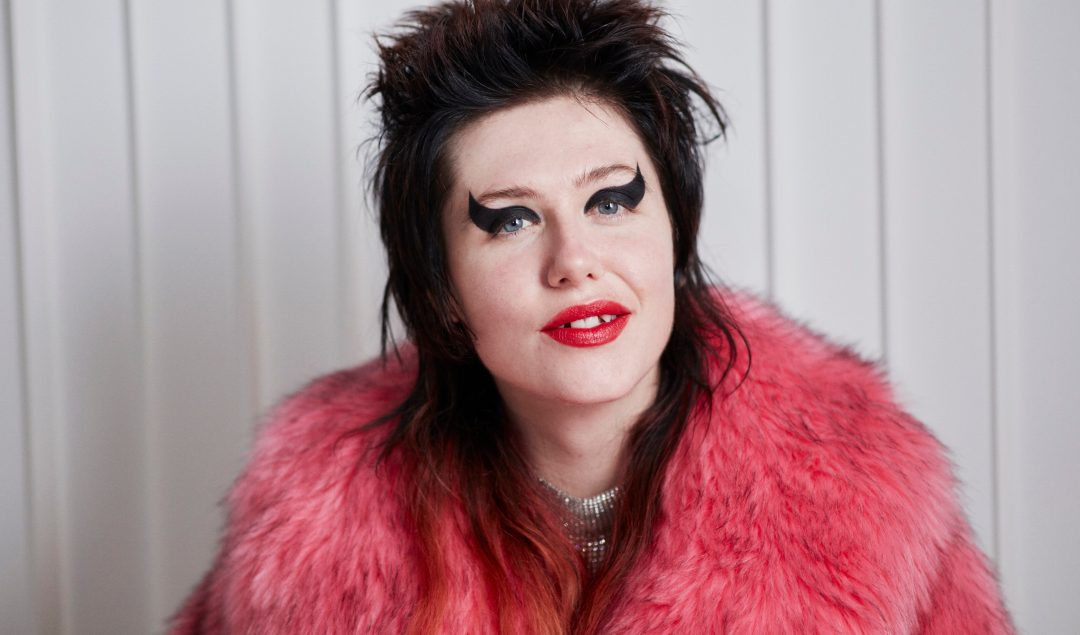 Makeup is something poetic and fleeting that you can add to your face, changing or highlighting something about yourself. I find it an almost magical language, strongly linked to the other details I use for the expression of the self, such as jewellery and a hairstyle. Of all these aspects needed to emphasize or underline an aspect of ourselves, makeup is the most immediate and the oldest way, making it the most fascinating –Alessandro Michele 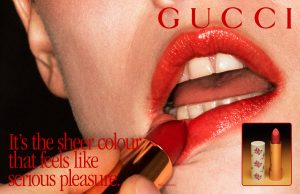 The unassuming quiet harmony of Alessandro Michele’s vision first seen on the runway over four years ago has built crescendo to a rhythmic roar. The shift disrupted the House’s narrative in fashion. Today that tune scores the launch of the first pieces of a new makeup line by Gucci.

Gucci Makeup is ideated under a manifesto of beauty in a script written by Alessandro Michele. A champion of expressing the self within no confines but absolute liberty, the creative director sees makeup as a way to show the character and the personality inside. Makeup should not mask but rather exalt flaws and make them part of the language of beauty. Defects should be evidenced and not hidden away. Within this language everyone should be able to wear makeup how they want to, whether to reveal your true self, allowing you to be yourself, or as a means to transform, allowing you to be who you want to be.

Gucci begins its new beauty story from the lips. A lipstick is the ultimate makeup tool, its fascination and desirability a result of its instant transformative power. Gucci’s three new lipstick collections are diverse formulations: Rouge à Lèvres Satin with a satin finish, Rouge à Lèvres Voile with a sheer finish, and Baume à Lèvres, a lip balm with a translucent finish.

To create these lipsticks, Alessandro Michele was inspired by the made-up lips of Hollywood’s stars from the Golden Age, their lips expressing sensuality, charm and influence—sometimes within the same look.

Lipstick is the most beautiful object you can find inside a handbag. It is the most fascinating because it has always had a beautiful scent—we made Gucci lipsticks perfumed with violet. Lipstick is a playful object because it recalls crayons that children colour with. Lipstick also symbolizes of the world of cinema, and all of the famous lips from Hollywood –Alessandro Michele.

Imbued with the House’s philosophy of navigating the past into the absolute contemporary, the lipsticks are brilliantly full of colour in a modern broad palette. The names of the shades are inspired by iconic Hollywood movies and characters from the gilded era, played by the likes of Jean Harlow, and other famous actresses – Maureen O’Hara, Anne Baxter, Bette Davis, Greta Garbo and their peers. The themes of the legendary films embodying the glamour and folly of the time also inspire the lipsticks, including titles such as ‘Love Before Breakfast’ ‘Three Wise Girls’ and ‘A Royal Scandal’.

Creamy with intense colour, the formula delivers a perfect and long-lasting satin finish, that leaves lips smooth and soft, and is lightweight with a comfortable feel. The 36 shades sweep from nudes— such as ‘Penny Beige’ a Hazlenut Beige to reds including ‘Odalie Red’ a vivid red, to pinks including ‘Vantine Fuchsia’, a rich fuchsia shade, with nuances of orange and purple and an unexpected black hue, ‘Crystal Black’.

Imparting a colour on the lips like a memory, the sheer formula gives a luminous finish in a pop colour palette of 18 shades that deliver a feeling of moisture and comfort in a lightweight texture, including hues named ‘Marguerite Jade’ a tawny brown, ‘Eadie Scarlet’ a red scarlet and ‘Marina Violet’ a dark raspberry violet.

Enhances the natural smoothness and texture of the lips, the lip balms give a soft glow of colour with three shades and one transparent formula, melting on lips to leave a feeling of hydration, moisture and comfort. Shade names include ‘Joslyn Clair’ in transparent, ‘René Pink’ a red pink and ‘Penelope Plum’ a plum hue.

Chosen by Alessandro Michele because of his admiration for the colour red, this emblematic red shade is formulated in satin and sheer finishes and recalls the red lipstick the Creative Director saw on the lips of the self-assured women when he was a child in the 80s. The shade is inspired by a legendary Hollywood character, Goldie. The starred 25 which also appears on the label is a reference to the Creative Director’s lucky number.

The idea of the campaign is to create a representation that is close to reality with a humanized point of view, however seemingly strange. But the strangeness is human so it’s beautiful. The shots by Martin Parr are like bullets; they are direct, dry, and then they are inclusive because these women are wearing makeup in a very liberating way –Alessandro Michele

At the centre of the campaign are the feminine ideals that have embodied lipstick as an iconic makeup tool. The beauty world has historically informed that lipstick should be applied perfectly, in the campaign this point of view is turned inside out. The message is authentic beauty lies in imperfection.

Martin Parr conveys this idea in a way that echoes his own documentary-style oeuvre which spans five decades. The British photographer has previously collaborated with Gucci: he shot the Cruise 2019 men’s lookbook which was made into a limited-edition book WORLD (The Price of Love), and Instagram project #TimetoParr for Gucci Timepieces.

Referencing the collection’s inspiration of vintage Hollywood movie stars, art director Chris Simmonds constructs a narrative that merges this theme with a surreal dream sequence presented as an 80s

aesthetic of irony, humour and playfulness. The products are introduced by different programs on the #GucciBeautyNetwork, tied together by a dream sequence that appears while a lead character watches TV.

The campaign films appear as 80s style commercial breaks that interrupt the surreal movie the character is watching.

The images advocate diversity, in a series of compelling visuals that reveal the lipsticks’ colours. Appearing in the campaign is Dani Miller, the lead singer of punk band Surfbort, whose music touches on politics, sexuality, mental health, and social media. She appears together with models Mae Lapres, Achok Majak and Ellia Sophia Coggins. The shades featured in the campaign are: 25* Goldie Red for the Rouge à Lèvres Satin and the Rouge à Lèvres Voile, 2 “No more Orchids” and 4 “Penelope Plum” for the Baume à Lèvres.

I thought back to the lipsticks I saw in my life, when I was little, my mum’s lipstick, who was always inspired by the 50s, and I wanted to give it the most powerful meaning, that of the Hollywood divas and the mythology of cinema, which first put the lips in the spotlight Alessandro Michele

First created more than a century ago in metal, the lipstick tube was a mechanical gadget, its technology hidden under a garnish of decoration and colour. Recalling this idea of embellishing a functional piece, the Gucci lipsticks are designed by Alessandro Michele as objects of desire. Inspired by vintage makeup, the lipsticks’ packaging interweaves House motifs with contemporary codes.

Packaged in a gold tube, Rouge à Lèvres Satin is etched with a decorative style drawn by Alessandro Michele that borrows its flair from Art Deco inspirations. Rouge à Lèvres Voile makes a feminine statement in a pink rosebud print on ivory with a gold base as if they came from a 1940s dressing table. The roses are reminiscent of the wallpaper of an old motel, of a beauty parlour in Los Angeles in the 1950s or the lipstick you would find in a vintage market. Baume à Lèvres is contained in a turquoise coloured tube, a hybrid shade of blue and green chosen specifically by Alessandro Michele because it represents an attention to colour, before pink was assigned as symbolic of the feminine world post war.

The lipstick collections are the first words of Gucci’s new beauty language, new chapters for the other elements of the face will debut soon.

The Gucci Makeup lipstick collection will be available for $38 each beginning May 6th exclusively at the Saks Fifth Avenue New York Flagship and nationwide on May 29th on Saks.com and Saks Fifth Avenue. 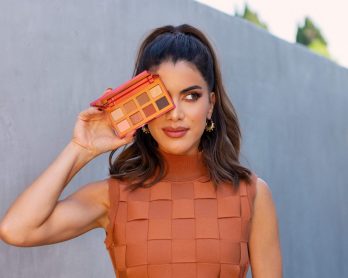 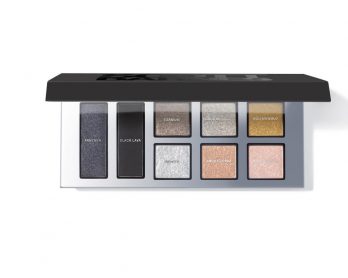 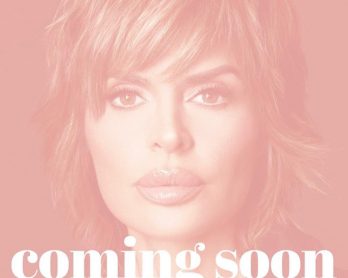 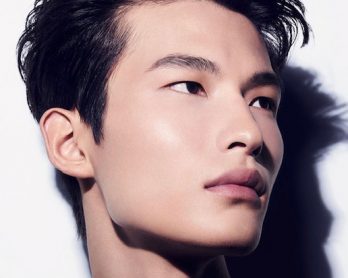